Chart [1] shows the typical pattern for the period, matching well with earlier studies in (1) and (3). There are two distinct peaks of calvings (a “bimodal” pattern in statistical terminology). The first at around two years old includes one quarter of the total population in the three-month period from 24 to 26 months. A second, subsidiary peak, accounts for a further 21% of the total, in the period from 32 to 34 months. The inference being that heifers during this period were generally reared to either achieve 2-year calving or come into the milking portion of the herd close to three years. Particularly relevant in herds aiming to exploit seasonal milk pricing policies, with targeted production to match peak pricing.

In mathematical terms this pattern illustrates why the two most commonly quoted measures of a distribution, the mean or average of the group, and the median or midpoint, can sometimes be less typical of the real expectation for the group as a whole. In this case the two measures are very close, at 29.1 months for the median, and 29.9 months for the mean or average. As can be seen though, calving at 29 months was less common at this time, with more typical animals calving around either two years, or approaching three years. 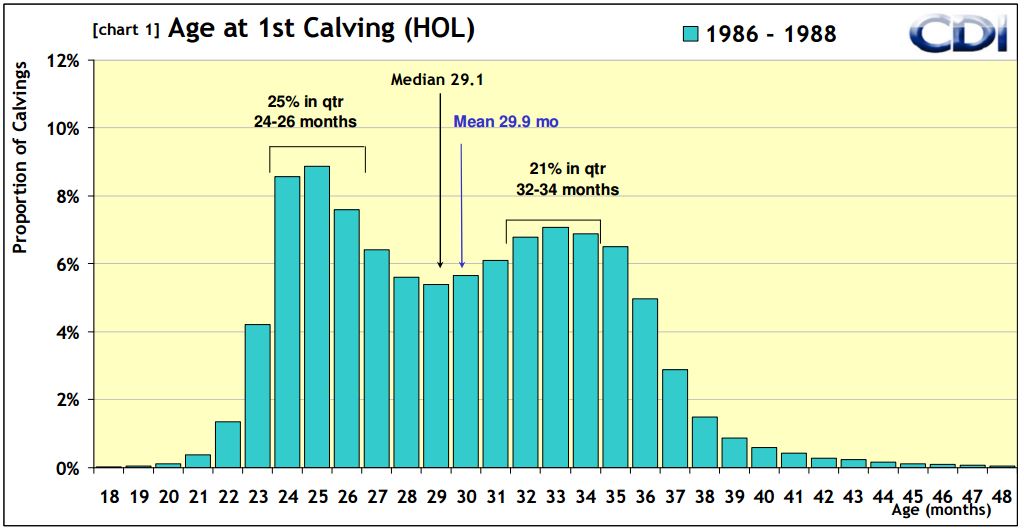